Student presentation on “The Man I Killed”

In C period, Robert composed a great Prezi for this story, and he focused on the theme of guilt. He selected some very significant statistics, including the fact that over 1.5 million Vietnamese died during the war, and the fact that 150,000 US soldiers committed suicide during a five year period after the war.

When I heard that statistic I was reminded of the idea that one of the Vietnam veterans who spoke to our class mentioned about people who are not memorialized on the Vietnam memorial, but who did not really recover from the war.

The next presentation, by Adam, addressed the idea of guilt — but after the war. It mentions that fact that O’Brien writes about conversations with his daughter, where he struggles with telling her the “truth” about what he did in the war. Did he kill anyone? He concludes the story with two answers — yes, and no. And that both answers could be honest.

Personally, I have puzzled about this ending a lot, and I still don’t really feel like I understand the idea. Sometimes I think that he may be referring to personal responsibility. When he killed enemy soldiers, it wasn’t really he himself doing the action — perhaps it was another version of himeself — an unthinking killing machine that throws grenades out of instinct. Or maybe because he was acting under orders from other people — not really acting for himself… 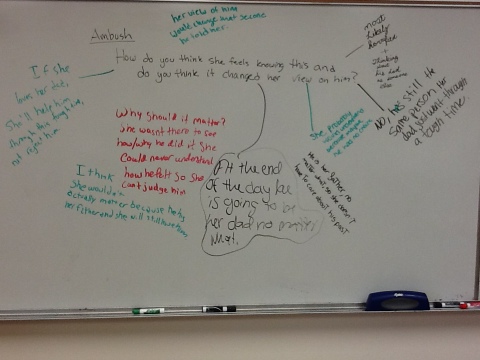 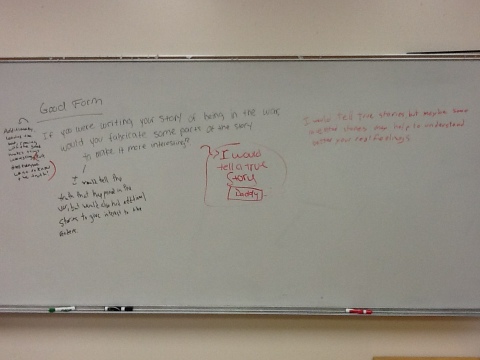 A happy English teacher with massive potential for growth. Trying to share the best I have to offer with the teaching world.
View all posts by englishparsons →
This entry was posted in English IV Class. Bookmark the permalink.